The Canning Stock Route is a track that runs from Halls Creek in the Kimberley region of Western Australia to Wiluna in the mid-west region. With a total distance of  1,850 km (1,150 mi) it is the longest historic stock route in the world. 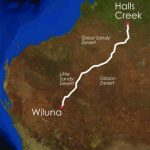 The stock route was proposed as a way of breaking a monopoly that west Kimberley cattlemen had on the beef trade at the beginning of the 20th century. In 1906, the Government of Western Australia appointed Alfred Canning to survey the route. When the survey party returned to Perth, Canning’s treatment of Aboriginal guides came under scrutiny leading to a Royal Commission. Despite condemning Canning’s methods, the Royal Commission exonerated Canning and his men of all charges. Canning was appointed to lead a construction party and between March 1908 and April 1910, 48 wells were completed along the route. Commercial droving began in 1910, but the stock route did not prove popular and was rarely used for the next twenty years. The wells made it difficult for Aboriginal people to access water and in reprisal they vandalised or dismantled many of the wells. A 1928 Royal Commission into the price of beef in Western Australia led to the repair of the wells and the re-opening of the stock route. Around 20 droves took place between 1931 and 1959 when the final droving run was completed.

This area is known for producing some of Australia’s most well-known female Aboriginal artists. In the mid-1990’s the utopian community moved across to painting on canvas. Now an elder in her community, Polly’s colourful works portray the ‘Bush Plum’ (Arnwetky), of which she is a senior custodian. Polly has the cultural responsibility to look after her totem, and the Anwekety is depicted through superimposed dot work. A vibrant and bubbly person, Polly speaks little English and lives a traditional life at the Camel Camp in Utopia Station. 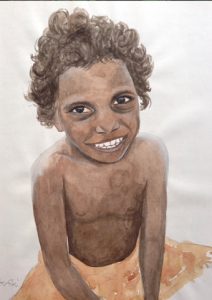 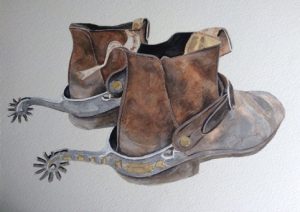 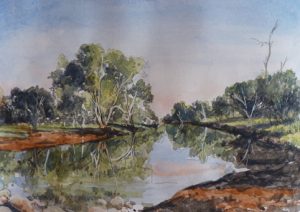 “This painting is Billy Hayes on horseback at ‘Amburla Station’ when Ted Egan produced ‘the Drovers Boy’. Sadly due to a lack of capital raised, he was unable to actually turn it into a Feature Film Billy was not an actor in the film but with his stockman skills he was employed to help get the cattle going in the right direction for the actor Will McGuiness and Ningali Lawford who were the two main characters to hold their own and play their role. It is very pretty here with the scenic back drop of the western Macdonald ranges. Billy tragically died three yrs ago in a mustering accident where he came off his quad bike and was killed. Billy was one of the best liked Men going around. Murray Hartin, a modern day poet from Moree has written a very famous poem about Billy called ‘Turbulence’. People all over Australia know the poem which was written about Billy . . .” Belinda Williams, 2014

Belinda’s words about Terry – “Terry Marshall is a well known drover from the Moree district. His son Jake rode in the line of horsemen in the opening ceremony of the Sydney Olympics in 2000. He was a dear friend to me, and is the subject of other paintings I have done. This artwork is Terry droving on the Watercourse. This is the thumbnail that I did for a much larger work that I was asked to donate for when Christopher Reeve came to Australia. The work was well received and from memory raised $6,600 towards Stem Cell research.” Belinda Williams. 2014. 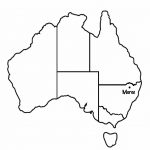 Moree is located on some of the world’s richest black alluvial soils. The region is central to the Northern Wheatbelt commonly referred to as the “Golden Wheatbelt”. But it is a region that supports endless variety. From cattle and cotton to sunflowers, mungbeans, olives and goats. The livestock industry has been prevalent in the Moree area since the 1830’s and in the period up until 1940 Moree was renowned as a major Australian sheep breeding shire. One of Moree’e most famed livestock areas is Gurley Station which is located 35km south of Moree and encompasses over 250,000 acres of grazing land. Cattle production in Moree remains a strong industry with many farmers diversifying their selection of livestock. Regional beef cattle production is renowned high quality that are well sought-after at the regular sales meetings at the Moree Saleyards. The Sale Yards are run by “The Gall Boys”, a family with a long connection with Moree, and a true sense of adventurous Aussie spirit!!

ABOUT THIS JIGSAW SERIES

THE AUSTRALIAN DROVER – A drover in Australia is a person, typically an experienced stockman, who moves livestock, usually sheep or cattle, “on the hoof” over long distances. Reasons for droving may include: delivering animals to a new owner’s property, taking animals to market, or moving animals during a drought in search of better feed and/or water. Moving a small mob of quiet cattle is relatively easy, but moving several hundred head of wild station cattle over long distances is a completely different matter. A drover had to be independent and tough, an excellent horseman, able to manage stock as well as men. Traditional droving could not have been done without horses. The horse plant was made up of work-horses, night-horses and packhorses, with each drover riding four or five horses during a trip.The standard team of men employed to move 1,200 cattle consisted of seven men: the boss drover, four stockmen, a cook and a horse-tailer. 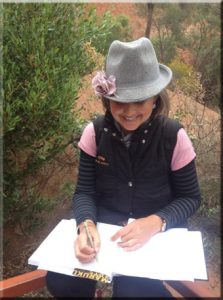 BELINDA WILLIAMS is an artist who experienced a true ‘bush’ upbringing. Her love of the colours and character of the Outback found their natural expression in art.

Capturing this majestic beauty in her watercolours, Belinda conveys the tranquility within an unforgiving land. Having spent many years travelling the Australian outback, Belinda has experienced the solitude of the landscape. Her artworks represent both the harmony and mood of our uniquely of the Australian landscape. Belinda has been painting professionally since 1997, and has since built a ever-growing number of exhibitions, private commissions and major works to her name.