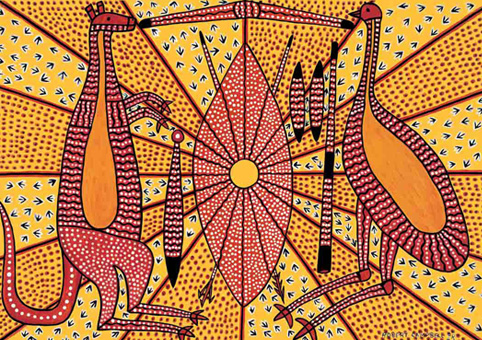 The original painting is owned by the Campbell family trust. “Australian Emblem” is symbolic of this artists vision of a nation united in their differences. Campbell dedicated his life to building bridges between native and settlement Australia. Our national emblem depicts the kangaroo and eum. These animals appear due to their unique trait of only moving forward. The outward pivot of their knee joints lead to this characteristic of motion.

This artwork is not just a vibrant illustration, but a celebration of the warrior. 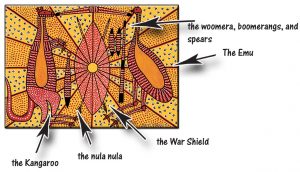 From the basis of the coat of arms, Robert uses a war shield, boomerang, nula-nula’s and a woomera to represent the indigenous warrior.

The strong yellow ochres symbolise our sun-drenched land. Robert’s unique portrayal of the sun feeding energy, or life force, into all creatures reflect the strong character of the Australian fauna. From the life-force grows the spirit of the Creation Ancestors inside all living things. Robert portrays our Ancestors as like ‘bow-ties’ inside the people and animals living ‘the Dreaming’.

As representative of the Australian Coat Of Arms, on the right hand side of the artwork is the emu, with the kangaroo on the left. 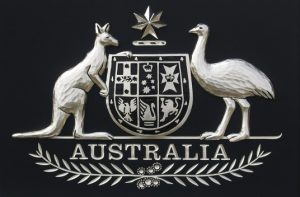 Robert portrays traditional aboriginal life within the context of our nation since settlement by European society. Together both natives and settlers stand for the same love of the land we call Australia. He has replaced the traditional war shield reflecting our European heritage, with the same objects, but as devised by native Australia, thus serving as a bridge between the societies. The symbol captures the spirit of the chief animals created by the Ancestors in their roaming of this land. The kangaroo, (the spirit of the warrior), and the emu, (the spirit of endurance), are instilled in the heart of all Australians through a connection to the Ancestors.