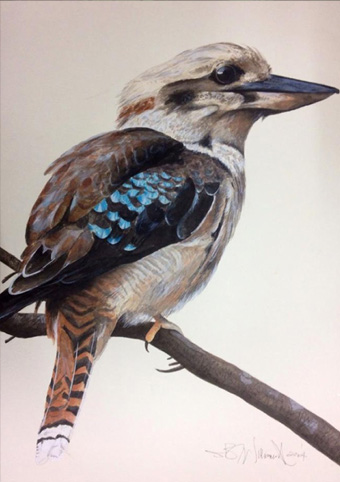 ABOUT THE BLUE WINGED KOOKABURRA

Kookaburras are a branch of the Kingfisher bird species, and is native to Australia and New Guinea. They grow to between 28cm and 42 cm in length. The name “Kookaburra” comes from Wiradjuri guuguubarra language, and is onomatopoeic of its call. Four species of kookaburra can be found in Australia. 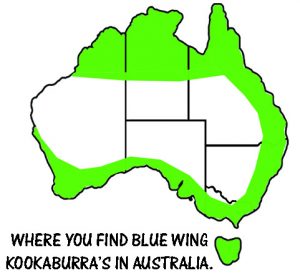 Kookaburras are almost exclusively carnivorous, (meat eaters). They prey on mice, snakes, insects, small reptiles, and the young of other birds; they have also been known to take goldfish from garden ponds. Kookaburras are believed to pair for life. The nest is a bare chamber in a naturally occurring tree hollow or in a burrow excavated in an arboreal (tree-dwelling) termite mound.

Both sexes share the incubation duties and both care for the young. Other Kookaburras, usually offspring of the previous one to two years, act as ‘helpers’ during the breeding season. Every bird in the group shares all parenting duties. Kookburra’s will live for around 11 to 15 years in the wild and 15 to 20 years in captivity. The kookaburra’s laugh is not because there is anything funny, but as a way of marking out its territory.

The word kookaburra is from the Wiradjuri Aboriginal word Guuguuburra, named for its sound of human laughter.

Aboriginal legend says the kookaburra’s infamous songs of laughter each morning is a sign for the sky people to light the great fire that illuminates and warms the earth by day, the sun.

THE STORY OF WHY KOOKABURRA’S LAUGH

Long, long ago, only the moon and stars lighted the Earth. No one had ever felt the warmth or seen the light of the sun.

The spirits who lived in the sky looked down on all the birds and beasts, and they were concerned that the creatures were not happy. One day a generous spirit decided the world needed more light, and so this spirit gathered others, and together they collected wood, and this they began to stack, higher and higher and higher. When the wood was stacked so high they could no longer see the top, they decided to light a fire.

“The creatures of the Earth will delight in our light,” the spirits said, “but we must announce its arrival.”

The spirits sent a star out into the sky — the first morning star — and instructed it to announce the arrival of the light that would soon warm the world.

The star shimmered and sparkled, but few noticed it there in the dimly lighted sky, and when the birds and beasts first saw the light of the great fire, they were shocked. Soon, though, they began to delight in its warmth, but seldom did they notice that tiny morning star.

The spirits decided they must find another way to announce the dawn.

“We’ll need a noise,” one of the spirits said.

“Yes, something loud. Something unusual, something startling,” the others agreed. They began to consider the creatures one by one.

Should the crane be granted the power to wake the world? What sounds could other creatures make that might wake everyone? Perhaps the bandicoot could loudly squeak, or the lorikeet could screech. Maybe the kangaroo could make a sound, or even the platypus.

The spirits agreed that all the creatures of this Earth were special, but how would they decide who would be granted this honor?

Time passed, and the morning star shone more brightly, but still many creatures did not notice the star and were startled by the sudden light of the great fire.

Then one day, just after the morning star began to shine, the spirits heard a most amazing sound. Kookaburra peered down at the ground and spied a mouse. He launched himself from his perch in the treetops and pounced upon that mouse, and when he had conquered his prey, he began to laugh. He laughed like no creature in the world laughed.

When the spirits heard that sound, they knew that Kookaburra must become the world’s morning trumpeter.

That very night the spirits visited Kookaburra in his home inside the gum tree.

“Kookaburra,” they said, “every day, just as the morning star begins to fade, you will laugh as loudly as you can. It is your laughter that will wake all the sleepers before our fire lights the sky.”

Kookaburra laughed when he heard this. “What if I say no?” he asked.

“If you say no, we will send no more light to the Earth. All the creatures will again live in the darkness.”

Kookaburra realized that he could become a hero, and oh, how he would love to be important and respected. “I’ll take the job,” he said, and the very next day, just as the morning star began to fade, Kookaburra looked up at the sky and began to laugh, “Garooagarooagarooga …”

When the spirits heard that sound, they lighted their fire, and slowly the Earth below began to glow from the light above. The warmth seeped down slowly, building as the fire blazed higher and higher. The flames leapt higher and burned for many hours. And then the fire began to die until, at long last, only embers remained, and the day grew dim at first, and then darkness came again.

The spirits gathered the last of the embers in the clouds, and these they used to start their fire the next day, just after they heard Kookaburra’s laugh.

When the Creator brought people into the world, the spirits instructed them. “You must never tease Kookaburra,” they said. The elders instructed their children, “If Kookaburra hears you making fun of him, he will never laugh again. Then we will no longer have light or warmth.”

So all the people learned, just as the beasts and birds had learned, that Kookaburra must be respected, for it is he who saved the light for all, and to this day he prepares all the people to greet the dawn.