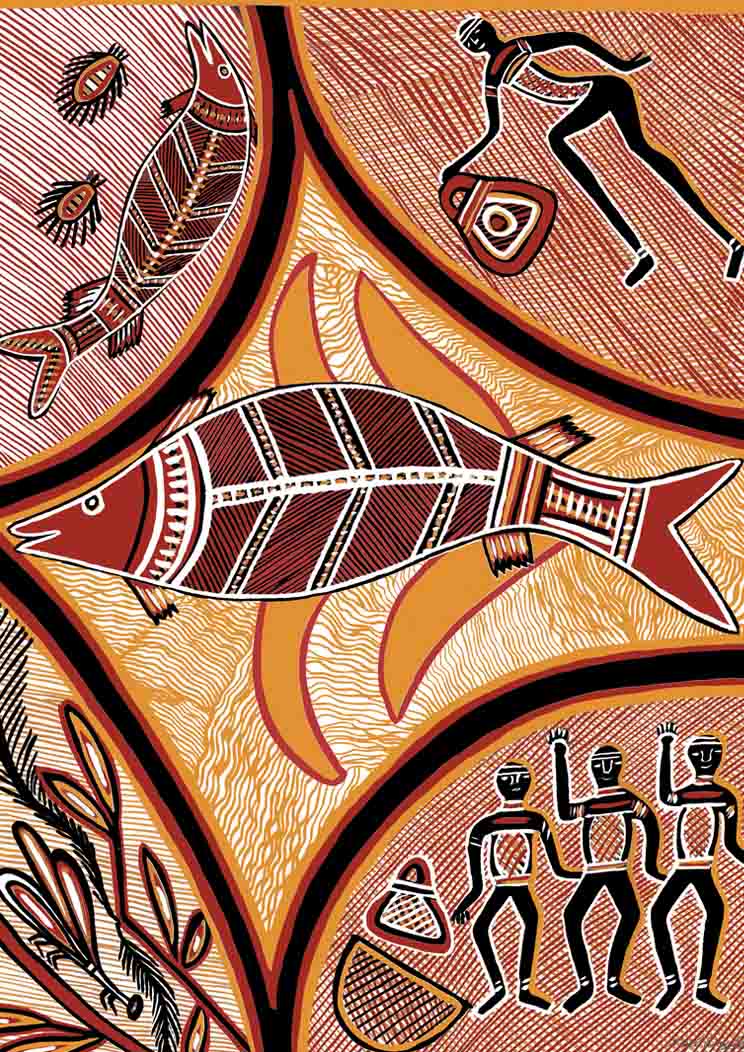 The name barramundi is Aboriginal for “large-scaled silver fish.”

Virtually all barramundi are born male, then turn into females when they are three to four years old.  This means female barramundi can only be courted by younger males.

Barramundi are catadromous fish, meaning that they are born in the ocean and live in freshwater — basically the opposite lifestyle of the salmon. However, they also are able to live purely in saltwater.

Large female barramundi can produce upwards of 32 million eggs in a season.

Those who believe in aboriginal dreamtime legend say barramundi has special aphrodisiac qualities. they also call it by its other name: ‘Passion Fish’

The barramundi is a highly prized source of food for the Aborigines of Australia. It is considered a wise and strong fish, truly capable of out smarting people. As a result the “barra” plays a large part in the region’s dreamtime mythology.

THE STORY OF MILAYBUMA the barramundi dreaming

This is the story of the Ancestor Nagorku, a Creation Ancestor who followed the great songline, (journey) of the Barramundi Dreaming. His journey took him along the coast from Cape Don, North Queensland, inland into the rivers and creeks of the region. There he found a ‘Dreaming’ site for the Barramundi at Maragalidpan Creek. This tale starts with the fishing village, where the dreamtime barramundi, says the legend, was spotted by three hunters, one of whom, Nagongbid, approached and managed to spear him. But before they could return for the great feast, the Ancestor Nagorku steals the dilly bag and Barramundi. He flees southwards, towards the inland creeks and rivers. The brave men of the tribe follow. They must battle through the gullys and cross danger waters. Along the way they must battle against the monsoon and floods. Along the way, they meet the wise praying mantis and helpful dolphin, which aid them in their chase of the Ancestor Nagorku. They crept upon Nagorku as he slept by the Maragalidpan Creek. They stole back the great Barramundi Milaybuma, and he cooked upon banana leaves that night. 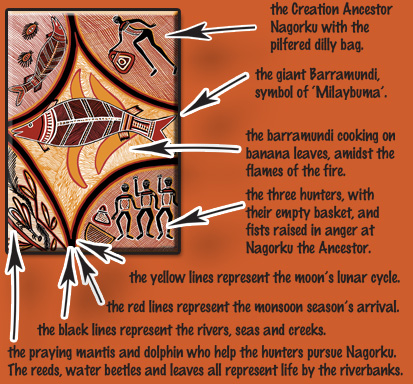