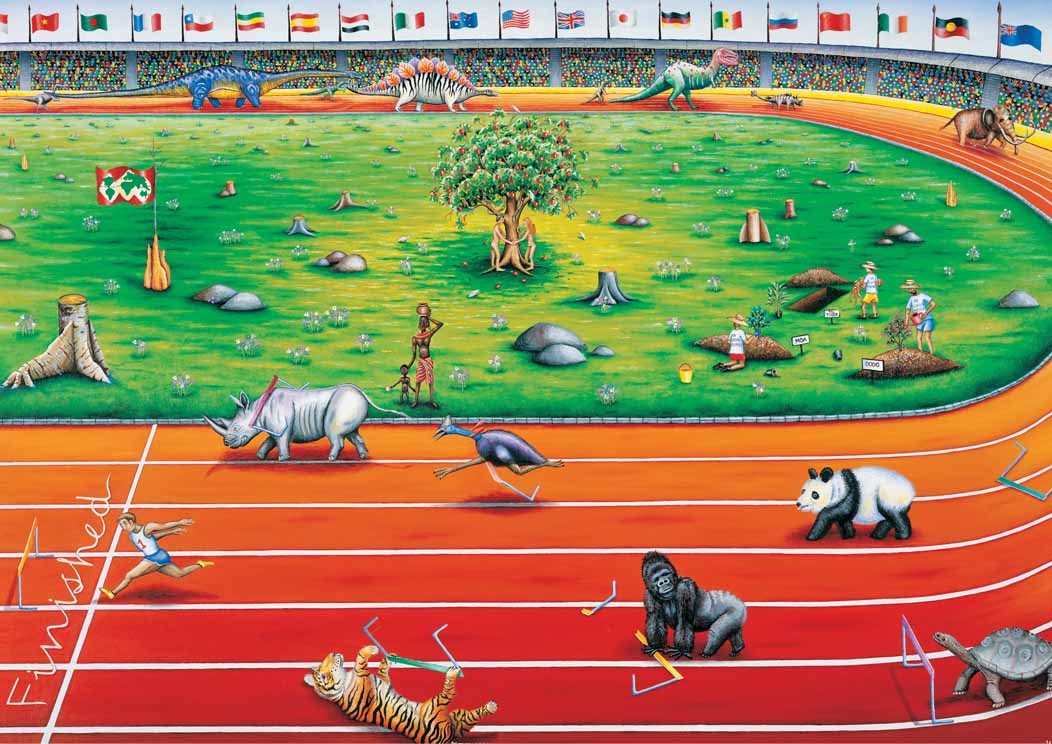 A time line from the dinosaurs to present day man, The Human Race reveals much about how we humans are divisive in a world in which we are call connected.  Central to the painting is Adam and Eve.  In the poem they ask, “What happened to our Garden, Was it something we did?”  They share their fruit, a first step in transformation.  They are owning their shame of Original Sin and taking control of their future and therefore the future of everyone else. This one gesture sets the pace in the race against time.  We are on the cusp of a point of no return as man’s greed is using up our planet’s resources.  It is the realisation of this fact in the mind of our competitor which will determine whether the human race is lost or won.  Over the finished line is a hurdle.  If man does not sense his connectedness with every other living thing before he reaches the line the hurdle will force his hand.  His hurdle will be the consequences of his greed catching up on him.  Like the hungry woman and her child he will suffer and through suffering we feel.   The cut down forest, now a stadium, reminds us that where we walk on bitumen roads or turf there was once bush.  Seeds have specific jurisdictions and if a city gets in the way of their fertile ground they can become extinct if they can’t adapt.  There are three people, the “original thinkers” who rather than cheering and encouraging our “winner”, plant trees on the bodies of extinct animals to make some sense of the loss and to address the balance.  Called “In living Memory” they awaken our genesis as children of our natural world.    The termite mound flies a flag of the world.  Termites work cooperatively to achieve great things for little creatures.  An example we could all follow.  In stark contrast to their flag are the stadium flags of countries.  There is much blood on these flags, many have been won through invasion and wars.  As people we identify ourselves by our countries…frontier lines all in our minds and invisible from space.   The audience represents most of us who ‘buy into’ the notion of winners and losers and cheer our competitor.  They become a part of his camouflage world, are seduced by it and ultimately it will consume them.

Adam stood under the tree and said, “What happened to our Eden;

Was it something we did?”

“I’m not sure”, replied Eve, “but this time let’s share our fruit”.

And in a bountiful World, there’s a race against time and Man wants to win.  Whatever the cost.

“There’s only so much to go around!”,  warns a mother who with her hungry child watches to see who wins the race…one she is  not running but feels she is destined to lose.

Man, in his competitive world, cannot see her, he cannot even feel her but he must own her pain because they are One and his choices help create her fall or her fun.  His hurdle awaits him over the finished line, perhaps then he’ll confront the truth he left behind.

And the animals run a race that they don’t understand because they exist as one part of one whole in a world where winners and losers aren’t real.   The gorilla speaks out “We see only what is, we don’t ask “what can I be?”,  “we don’t question our life”, says the  panda.  We don’t ask, “What’s in it for me?”.  The tortoise looks up and says, “Just let it be…the future is there for us all to see, eventually!”

And as our audience applauds that our man is winning, blind as they are to the nonsense in that, for our losers are generally the wisest amongst us.  They have suffered to see the value in all that we have.

Our original thinkers dig holes and plant trees in living memory of animals gone.  “Our actions acknowledge the imaginations we have to create a world which is loved”

And in a stadium which once bore the forest, the seeds of all life, The Garden, our home

Where termites live in a world of connection, cooperating and raising their children as one.  Their flag shows not division, but one home we cannot own.

Then gone will be the fight.

And we will share once again a Garden of Light.