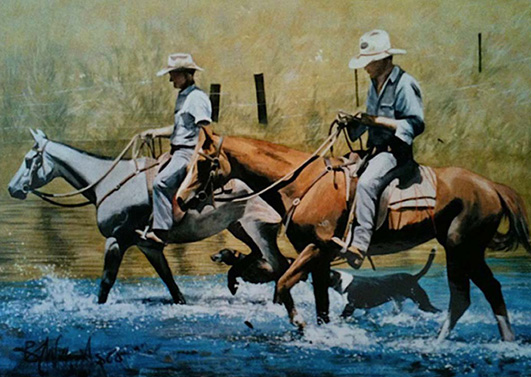 Belinda painted this work in 2009, while she spent some time travelling across the pastoral regions of Western Australia. She followed the Canning Stock route, (refer attached map), where she photographed two drovers, driving a train of cattle to the sales yards, for despite not being in official use in this mechanical age, it is still a frequently used,  and this painting is the result.

ABOUT THE CANNING STOCK ROUTE 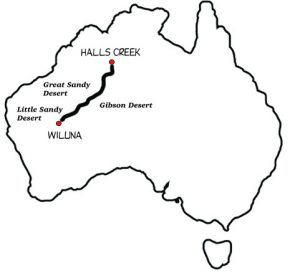 The Canning Stock Route is a track that runs from Halls Creek in the Kimberley region of Western Australia to Wiluna in the mid-west region. With a total distance of around 1,850 km (1,150 mi) it is the longest historic stock route in the world. The stock route was proposed as a way of breaking a monopoly that west Kimberley cattlemen had on the beef trade at the beginning of the 20th century. In 1906, the Government of Western Australia appointed Alfred Canning to survey the route. When the survey party returned to Perth, Canning’s treatment of Aboriginal guides came under scrutiny leading to a Royal Commission. Despite condemning Canning’s methods, the Royal Commission exonerated Canning and his men of all charges. Canning was appointed to lead a construction party and between March 1908 and April 1910, 48 wells were completed along the route. Commercial droving began in 1910, but the stock route did not prove popular and was rarely used for the next twenty years. The wells made it difficult for Aboriginal people to access water and in reprisal they vandalised or dismantled many of the wells. A 1928 Royal Commission into the price of beef in Western Australia led to the repair of the wells and the re-opening of the stock route. Around 20 droves took place between 1931 and 1959 when the final droving run was completed.