ABOUT THE PALM COCKATOO

The palm cockatoo is 55 to 60 cm in length and weighs around 1.2kgs. Palm cockatoo’s are mostly found around Cape York, in the far north of Queensland, 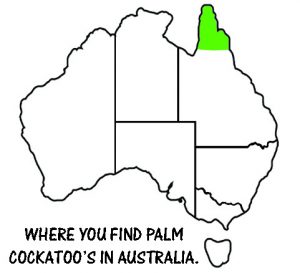 Australia and in Papua New Guinea. It is probably the largest cockatoo species and is the largest parrot in Australia, (although some yellow-tailed black cockatoos and sulphur-crested cockatoos can overlap in size). It has a distinctive large crest and has one of the largest bills of any parrot. This powerful bill enables palm cockatoos not only to eat very hard nuts and seeds, but also enables males to break off thick (3cm) sticks from live trees to use for a drumming display! As a result, the male has a larger beak than the female.

The palm cockatoo also has a distinctive red cheek patch that changes colour when the bird is alarmed or excited. It has a large and complex vocal repertoire, including many whistles and even a “hello” call that sounds surprisingly human-like. Distinct dialects occur throughout the species’ range. Evidence indicates a palm cockatoo at 80 or 90 years of age in an Australia. Yet the oldest confirmed bird was aged 56 in London Zoo in 2000. While the age of zoo birds is known, the lifespan of palm cockatoos in the wild is still unknown.