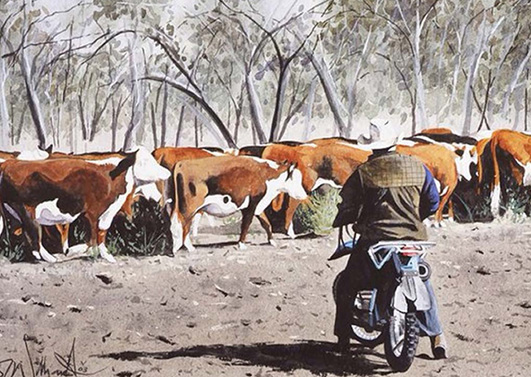 “Terry Marshall is a well known drover from the Moree district. His son Jake road in the line of horseman in the opening ceremony of the Sydney Olympics. He was a dear friend to me, and is the subject of other paintings I have done. This artwork is Terry droving on the Watercourse. This is the thumbnail that I did for a much larger work that I was asked to donate for when Christopher Reeve came to Australia. The work was well received and from memory raised $6,600 towards Stem Cell research.” Belinda Williams. 2014.

THE AUSTRALIAN DROVER is a person, typically an experienced stockman, who moves livestock, usually sheep or cattle, “on the hoof” over long distances. Reasons for droving may include: delivering animals to a new owner’s property, taking animals to market, or moving animals during a drought in search of better feed and/or water. Moving a small mob of quiet cattle is relatively easy, but moving several hundred head of wild station cattle over long distances is a completely different matter. A drover had to be independent and tough, an excellent horseman, able to manage stock as well as men. Traditional droving could not have been done without horses. The horse plant was made up of work-horses, night-horses and packhorses, with each drover riding four or five horses during a trip.The standard team of men employed to move 1,200 cattle consisted of seven men: the boss drover, four stockmen, a cook and a horse-tailer.