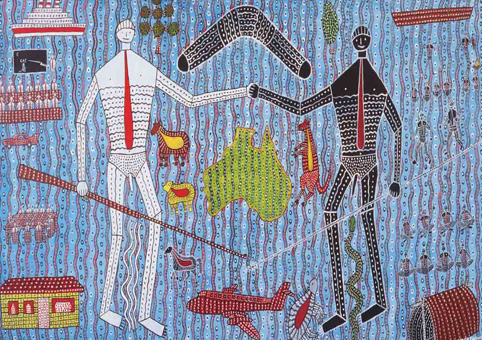 The original painting is owned by the Art Gallery of Western Australia. “Two Cultures” is symbolic of this artists vision of a nation united in their differences. Campbell dedicated his life to building bridges between native and settlement Australia. The artist always referred to the work as “Let’s Be Friends”, as he held a great hope not for aborigines, but that all Australians could find their place in the Dreamtime.

“Two Cultures” was the official artwork to represent the bicentennial of Australian settlement in 1988. Campbell himself always called it, “Let’s Be Friends”, and it holds a single message, that despite differences we are all the same. On the right is the native world, camps, canoes & storytelling together with the kangaroo, echidna and eucalyptus tree.On the left is settlement culture, with classrooms, houses and ships. The cow, sheep, goat and apple tree symbolise introduced flora & fauna.