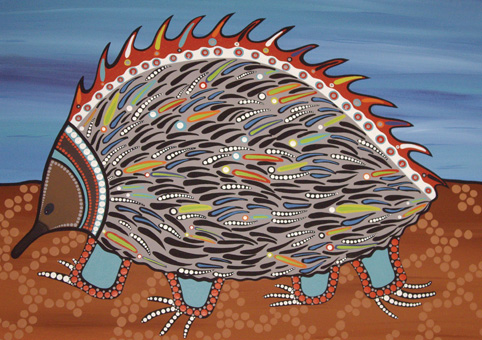 ECHIDNA FACTS Echidna’s have spikes like a porcupine, a beak like a bird, a pouch like a kangaroo, and lays eggs like a reptile. They’re small, solitary mammals native to Australia, Tasmania, and New Guinea, and grow to around 40 centimetres in length and weigh 3-5 kilograms. Echidnas have the lowest body temperature of any mammal, 32oC .Their long life spans, of 50 years in captivity, and 45 years in the wild — are due to their low body temperature and slow metabolism. Ednidna’s have no teeth. But have very practical tongues. At the end of their slender snouts, echidnas have tiny mouths and toothless jaws. They use their long, sticky tongues to feed on ants, termites, worms, and insect larvae. Echidna can feel vibrations through their noses. An echidna has large, vertical slits just behind its eyes for ears. They also have extremely good hearing.

THE ECHIDNA DREAMING
The echidna totem teaches one that it is important to keeping track of matters close to the heart: such as one’s home, relatives, neighbors and to strive to make one’s life successful and serene.

The Echidna dreaming is a feminine indigenous totem. In traditional dreamtime society the echidna represents protection, life, unity and fertility.
The circular shape of the animal represents the life cycle or the continuation of life.
The spines of the Echidna represent protection. When an Echidna is threatened it rolls up into a ball, so that only its sharp spines are exposed, warding off any predators.
The round shape of the Echidna and its egg laying ability symbolises fertility. and represent unity and togetherness.

THE MYTH OF THE OLD MAN ECHIDNA

IN ABORIGINAL MYTH Echidna (variously known as Piggi-Billa, Tjirilya, Jula-wil, Libgwil or Gauang) was a very old man who lived apart from his people, seldom leaving the shelter of his gunyah (bark hut). He was too old to hunt and survived by luring young men to his camp and killing them for their flesh.

When this horrifying secret was revealed, the Aboriginal men sought out Echidna and, surrounding him, threw spears at him until they formed a bristling mass on his back. Then they broke his arms and legs, leaving them distorted and twisted. Badly hurt, Echidna crawled into a hollow log and stayed there until his wounds healed.

When he finally emerged, his hands and feet were changed into strong, useful claws that could be used for digging and his arms and legs, though terribly bent, were still able to carry him. But neither he nor his wife Nunkito were able to pull the spears from his body.

When you come across Echidna in the bush today, he buries himself immediately to get out of your sight, for he still remembers the humiliating punishment he received for his cannibalistic crime.