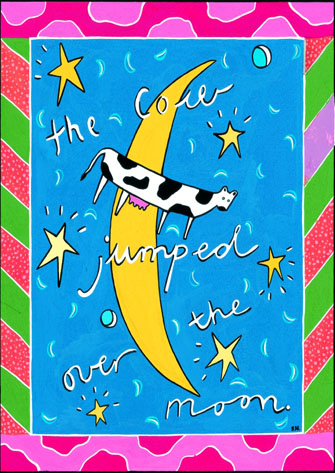 COW JUMPED OVER THE MOON

THE COW JUMPED OVER THE MOON

Hey diddle, diddle, the cat and the fiddle, The cow jumped over the moon; The little dog laughed to see such sport, and the fish ran away with the spoon. (Author unknown, Written in the 16th Century, England.)

ABOUT THIS NURSERY RHYME

The famous cow ‘jumping over the moon’, is a part of the tale from the nursery rhyme titled “Hey diddle diddle”, written over 350 years ago during the reign of Queen Elizabeth 1 of England. During the reign of Queen Elizabeth 1 England had many lives to a bitter war between the Protestant and Roman Catholic religions. These battles included major wars with Spain and France, and many families lost sons and fathers. During her time as Queen, Elizabeth encouraged people to begin to enjoy life after so much suffering and loss of life. She encouraged people to laugh and express themselves through songs and rhymes. Nursery rhymes became popular as it became recognised that laughter starts at an early age, and happiness is something that is not guaranteed in life. That it was something people must be urged to express, and by teaching happiness creates a better world.